Producer/Director Carol Medland is visiting the DGLFF. Come and see a double feature of his films The Cost of Love and The Adored on Sunday form midday. Tickets avaliable at the door.

Through the lens of Carl Medland
By Danie Jacobs

A special event is taking place at the Durban Gay and Lesbian Film Festival tomorrow and the LGBTI community should come out to support it. Carl Medland flew in from London early in the week to attend the festival at the KZNSA Gallery in Bulwer Road, Glenwood. He was greeted at King Shaka International Airport by the organiser of the festival, Jason Fiddler, with a huge rainbow gay flag!

Carl has made two feature films and Durbanites are in luck as they will be screened back to back on Sunday 27 May. The Cost of Love will be shown at noon and The Adored at 4 pm and Carl will be in attendance. A Q&A will also take place after both films. I had an exclusive interview with this creatively proud gay man who is so happy to be in Durban, showing his films to the community and who can't wait to answer your questions about his films. According to him, he loves to get feedback from those who have just viewed his films. He told me he attended one of the earlier screenings just to view the reaction of the audience. I think the film festival organizer deserves a pat on the back - and your support - for bringing him out and for showing such a diverse range of gay cinema.

Carl's two films are very diverse but riveting and not to be missed. He said he tries not to make fluffy films and tries to show the real side of the community - with its hardship and pain - and then mixes it with comedy to soften the blow. The Cost of Love shows the universal theme of love and that everybody pays a price for love - not necessarily financially but also emotionally. He tries to show all forms of love. The main character, Dale, is a hustler, but sex is rarely seen. Those ready for a hard-hitting joyride through London shouldn't miss it. According to Carl, there is so much of him in the film as he wrote, directed and produced the film.

The Adored, produced and directed by him with a script written by his brother, is a crossover film that portrays two women, both broken, and how they search for adoration. This psychological thriller touches on very serious issues such as miscarriage. This film was very well-received, seen as it doesn't speak at lesbians, but rather shows a more genuine side for a change!

Please come out and support the festival and hopefully get lost in the magic of gay cinema as seen by Carl Medland. He told me he'll be back in Durban for the festival next year. Lovers of gay cinema should keep thumbs crossed that he will bring his latest film to the festival next year. Filming on The Art of Killing should begin in January 2013. He calls it a gay slasher film. He's also working on a film called Conversations We Never Had that should debut at film festivals soon.

Caption: Visiting British director Carl Medland is seen with the posters of both his films, The Cost of Love and The Adored. 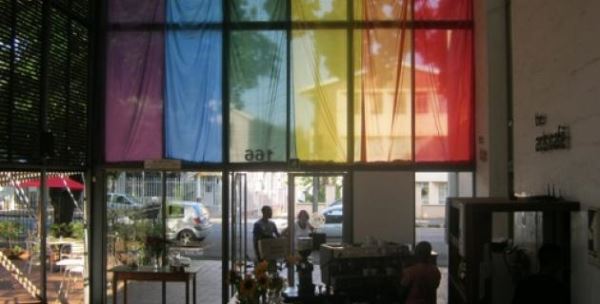