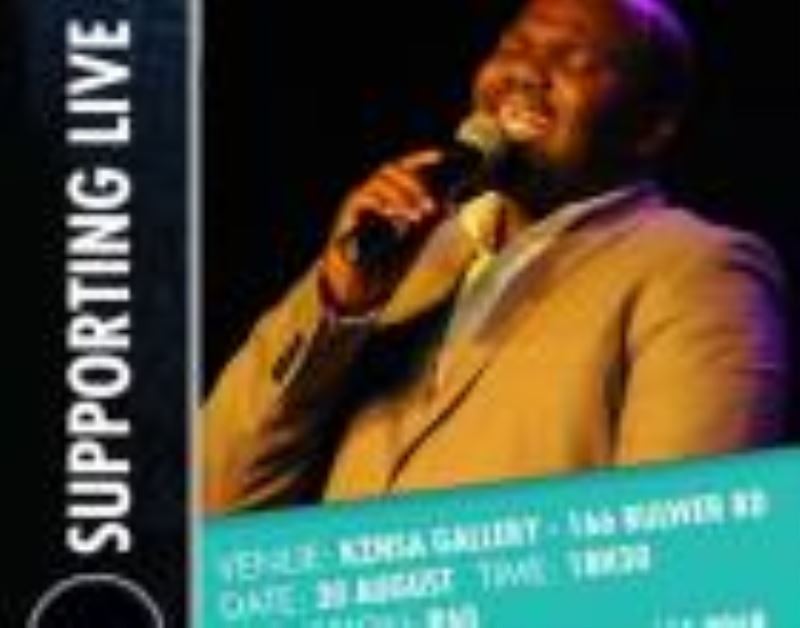 The accomplished vocalist, composer and arranger, Mbuso Khoza, will be performing live at the KZNSA this Friday.

The South African songbook has a new addition. The world music stage has a new feature.  Suddenly, the void left by the insupportable demise of vocalists Jabu Khanyile and Busi Mhlongo, amongst many others, is all the more bearable. And we are all the richer for it.
Mbuso Khoza has humbly accepted the mantle and generously offered his vast musical gifts to South Africa, the continent and world.
When once the circumstances seemed to conspire to deprive us of Khoza’s essential voice, destiny has intervened. He has endured a particularly disabling upbringing and debilitating early losses and has surfaced unscathed. Where scars should have been permanently etched onto his personality, he emerged wearing a brimming, captivating smile.

These inspirational traits are indeed overwhelmingly abundant in Khoza’s music. Blessed with an enchanting singing voice, he takes to music making with the ease of a natural. His debut album, Zilindile, is testimony to a blend of song-writing, lyric crafting and vocalising skills of the most angelic order. Khoza’s knack for working with supremely gifted musicians makes his sound all the more compelling.
Khoza came to Johannesburg, from his native Eshowe in KZN as a gospel hopeful in the early 2000s. Back home, he had been fleeing political turmoil, abject poverty and his status as an orphan without the benefit of formal school education. His dreams of fulfilling his musical calling were not deterred, but were nurtured, by the immense difficulties he soon encountered. Among these was life on the streets, rejection and the backstabbing that accost any purpose-filled mission.

The Khoza that the world is about to meet is now an accomplished vocalist, composer and arranger. Under his belt are successful stints as a session artist, back-up vocalist and a solo artist with a mission.

Having worked extensively on composer, arranger and pianist Themba Mkhize’s various projects, Khoza went on to sharpen his skills with Thandiswa Mazwai, Siphokazi, Sibongile Khumalo and even successful House music outfit, Revolution amongst others.
This journey has also seen him touring France – where he performed in Cannes at a Miriam Makeba tribute concert. He has also performed in Portugal, Switzerland, Burkina Faso, Zimbabwe, Mali and Senegal as part of various South African musicians’ tours.
Defying all known categories, Khoza’s music can be best described as the meeting of the isiZulu and West African idioms. Not surprising from a man who lists Cameroon’s Richard Bona, Mali’s Salief Keita and KwaZulu’s  Princess Magogo, Sibongile Khumalo and Busi Mhlongo as some of his biggest influences.

His voice betrays his early influence as a spiritual traveller alongside the highly musical Nazareth Baptist Church (Shembe) followers. His lines speak of hope, love and Africanness.

Having worked with the awe-inspiring Nduduzo Makhathini for the Zilindile project, Khoza went on to assemble a great band of musicians to embark on a promotional tour. Appearances in prestigious events such as the Standard Bank Joy of Jazz (2012 and 2013), Ugu Jazz Festival and Siyagiya Arts and Cultural Festival, among others, are early confirmation of the potency of Khoza’s music. Joyous Celebration 17 opens with Khoza’s solo, yet another recognition of his growing status as an authentic talent.
Audiences in Johannesburg and KZN continue to confound doubting radio compilers by snapping the album even before it’s on high rotation. Khoza is a Metro Music Award 2013 winner in the Best Contemporary Jazz Category.