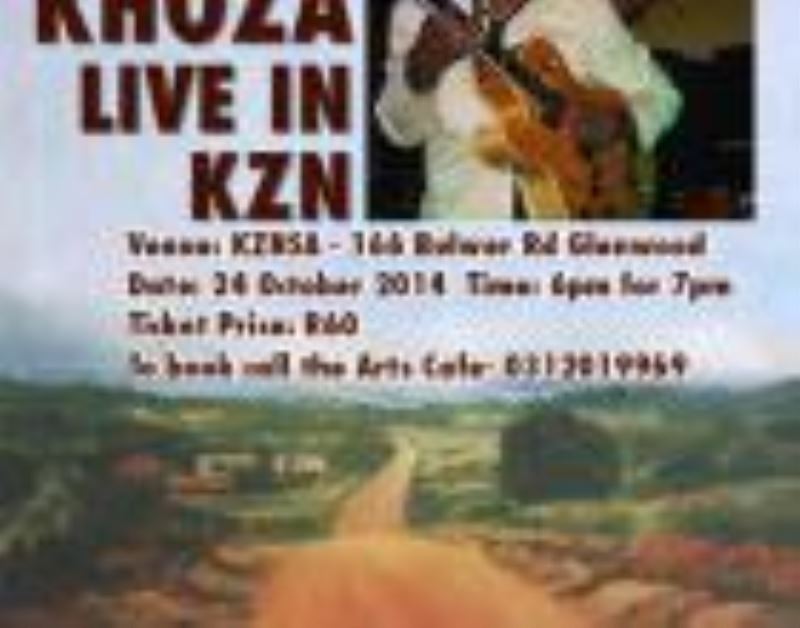 Bheki Khosa, clansman, guitarist, producer and world traveler will be sharing his subtle and intimate sounds at various local venues in and around Durban.

The unique style of Bheki Khoza’s jazz guitar will be heard in Durban again thanks to  Concerts SA! Bheki Khosa, clansman, guitarist, producer and world traveler will be sharing his subtle and intimate sounds at various local venues. With a line-up that reads like a who’s who of happening jazz men who never compromise, jazz lovers should take note of the concerts date and ensure that they are there to witness some fiery authentic music.

Bheki Khoza plays left handed guitar; his style is drawn from his deep cultural roots and given polish and style by his years overseas where he played with such greats as Wes Montgomery and Sonny Rollins. He played with the fabulously popular African Jazz Pioneers creating one of their greatest hits, Sgaxa Mabhande. He was the favoured guitarist to musicians such as Zimbabwean-born jazzy song-bird Dorothy Masuku, who wrote and performed songs celebrating the music of her adopted Sophiatown for decades. In the 90’s he was often around Durban touring with such greats as Sipho Gumede, Winston Mankuku and Victor Ntoni who often played such happening venues as the Bat Hall (now Sipho Gumede Hall and, of course the famous Rainbow Jazz Restaurant in Pinetown.   He is producer for the sensational singer / performer Simphiwe Dana.

Bheki Khoza Profile:
Bheki is a left-handed guitarist from Umlazi. He Studied under Jackie McLean and Larry Ridley (who has played with Wes Montgomery, Sonny Rollins, Horace Silver) at the University of Hartford, in USA. Prior to studying in America, Bheki played with the African Jazz Pioneers (he composed their hit (Sgaxa Mabhande). He has performed with Sipho Gumede, Winston Mankuku Ngozi and Victor Ntoni to name a few. His other achievements include producing Simphiwe Dana’s album One Love Movement as well as being a music director of Sophiatown, a documentary. Included among these is the sound track for the South African film Drum.

About the school Concert:
KwaHluzingqondo High school in Amahlongwa and its community in the South Coast of KwaZulu haven’t had water in almost 4 months. The Mazisi Kunene Foundation raised money to drill a well. When the project started most people said they might ONLY find 1,000liters of water if they are lucky. Art Knows no Boundaries, an outreach program by The Headroom Studio/Music Events, a program that visits schools, followed this amazing story closely. There are fond memories of excitment when the drilling started. They found over 20,000 liters per hour of FREE water. They found enough water for the entire community of Amahlongwa. Bheki Khoza will stage a day concert for the students and the community. Celebrating Our School, Our Heritage is a collaborative event between The Headroom and the Mazisi Kunene Foundation, supported by Concerts S.A.

About Mazisi Kunene Foundation:
Through a concerted effort by the Mazisi Kunene Foundation,the Mazisi Kunene Centre of Excellence, Bidvest Freight & many other dedicated partners we've successfully increased the Matriculation Pass Rate at KwaHluzingqondo High School from 33% in 2009 to 87% in 2013!!
KwaHluzingqondo High is located in Professor Kunene's hometown of Amahlongwa, South Africa.
Professor Mazisi Kunene was a great freedom fighter, literary icon and poet. A talented writer whose inspiration was the history of Zulu people, the liberation of Africans everywhere and the oral traditions of African literature.â€¨Kunene’s works were originally written in Zulu before they were translated into other languages, because he championed the inherent value of African literature written in African languages. Emperor Shaka the Great & Anthem of the Decades are two of his best known works