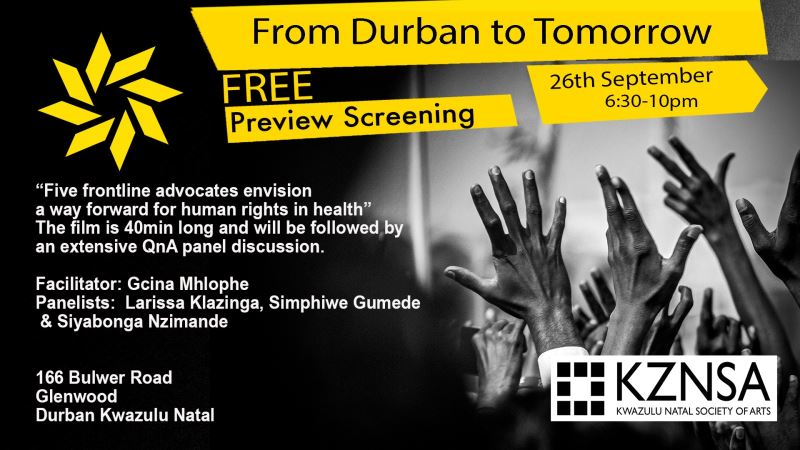 Join Sunshine Cinema for a free preview screening of the documentary, From Durban to Tomorrow, directed by Dylan Mohan Gray, the director of the acclaimed film, Fire in the Blood (about the global fight for affordable HIV treatment) on September 26th at the KZNSA Gallery from 19h00 - 22h00.

Join Sunshine Cinema for a free preview screening of the documentary, From Durban to Tomorrow, directed by Dylan Mohan Gray, the director of the acclaimed film, Fire in the Blood (about the global fight for affordable HIV treatment) on September 26th at the KZNSA Gallery in Glenwood, Durban from 19h00 - 22h00.

Gcina Mhlophe born in 1959 and is well-known for her roles as a freedom fighter, activist, actress, storyteller, poet, playwright, director and author. Storytelling is famously a deeply traditional activity in Africa, and Gcina does exceptionally well. She is one of the few women storytellers in a country largely dominated by males. Gcina does her most important work through charismatic performances and works to preserve storytelling as a means to keep history alive as well as encourage South African children to read. Gcina was born on the 24th October 1958 in Durban, South Africa and speaks five languages, Zulu, Xhosa, English, Afrikaans and Sotho. She matriculated at the Mfundisweni High School in 1979 and participated in a Cadet Journalism course at the Rhodes University as well as partook in a six-month film making course as part of the Interchurch Media Programme’s community project. As a journalist, Gcina held a part-time news reading position at Press Trust, Africa Service and between 1982 and 1983 she was writing for the Learn and Teach magazine. Gcina delivers her stories in four of South Africa’s languages, English, Afrikaans, Zulu and Xhosa, which makes it possible for South Africa’s people to receive her stories in a language that can be understood by a diverse majority. Most recently she has played a formative role in the development of the new film Liyana - LIYANA is a genre-defying documentary that tells the story of five children orphaned by HIV/AIDS in the Kingdom of Eswatini who turn past trauma into an original fable about a girl named Liyana who embarks on a perilous quest to save her young twin brothers.

2. Simphiwe Gumede currently 35 years of age, mother of 3. Got infected in 2011 by an abusive boyfriend. Hence in 2012 has embarked on a journey to promote the importance of acceptance of one's positive status, condom use, testing, positive living with HIV, importance disclosure and accepting others disclosures. Also addresses self-love, forgiving self and/ or infector whether done by mistake or on purpose . Addresses Gender-Based Violence( share my story and how I got out) In 2012 started taking ARV's. Then embarked on promoting adherence on treatment. Had her last born whilst on treatment and share the journey from planning the pregnancy till she gave birth hence to make sure she is born negative.

3. Siyabonga Nzimande is a Director of THINK from September 2015, a function that carries in parallel with the role as external stakeholder manager and Community Engagement head at THINK. He a pastor, inspirational leader, and a community leader. Independently he has engaged external support for Community Engagement activities on behalf of THINK and proudly participates in international and national conferences presenting the work of THINK. His goal is to get the communities engaged in research and encourage active participation in clinical research not only as enrolled study participants but also supporting research through input in protocol development and aiding results dissemination. Siyabonga is an activist in the District AIDS Council as the Chair of eThekwini and Executive member of the Provincial AIDS Council in KZN. Siyabonga Hold a Master in Clinical Psychology and National Diploma in Public Administration.


RSVP
To secure your spot send your RSVP - with your name, and which screening you would like to attend to Medina Berende medina@sunshinecinema.org (one RSVP per person)