Nair’s first solo exhibition at the KZNSA Park Contemporary Gallery brings together a body of work more than ten years in the making. This because the 12 graphite pencil on paper works represent a journey of self discovery that can only be described as an immense and necessarily brave self investigation into the artists psyche.

Firstly, the works are distinguished by the sheer brilliance of the draftmanship. I mentioned at the exhibition opening that… “The work is some of the finest drawing that I have ever seen in my 20 odd years in the contemporary fine art arena”. The chiaroscuro or ‘light and dark’ characterised by bold contrast gives the images a jewel like quality reminiscent of the 17th and 18th Century masters. Indeed Nair refers to a plethora of influences in his artist’s statement, the surrealist Georges De Cherico; Van Gogh; the Romanticist Géricault; Bruegel, and Raphael. In many instances the composition and content of each piece reflects the construction particular to specific works by these masters.

No mean feat – ‘withdrawings’ is a highly considered series that whilst referring to the techniques and concerns of the past is in no way derivative. Nair achieves this by his consistent attention to the personal and the peculiarities of place. Many of the works depict familiar Durban cityscapes. Says Nair of ‘This Dream is Driving me Crazy’,” This image is a faithful reproduction of a recurring nightmare. The two buildings, taken from local Durban architecture…are symbols of hopelessness, for all the doors and windows are solidly bricked up’. In The ‘Futile Quest of the Tongue Tired, Social Misfit’, the building depicts a popular Durban restaurant perched on an inaccessible mountaintop. The lone figure in front was inspired by the lone waiter in Van Gogh’s ‘The Night Café’.

Perhaps one of the most extraordinary classical references in the series is ‘The African Renaissance’ – an exquisitely rendered portrait of the front of the Durban City Hall (steps). The figures (many insalubrious) portrayed in seemingly everyday activities are configured precisely to mirror the figures on the steps of ‘The School of Athens’, one of the most famous paintings by the Italian Renaissance artist Raphael. Comentators have noted of Raphael’s work, that almost every known Greek philosopher can be found in the painting. Nair has neatly and perhaps subversivly raised the question of the nature and intent of our own ‘African Renaissance’.

Nair’s work is layered with such social  commentary, whilst at the same time giving voice to intensely personal conundrums - In ‘Far From the Rabble’ he notes, ‘The hills, field and trees are the roots of my soul, my very being. The house depicted is actually a derelict house from Umbilo Road, Durban. Here it becomes my place of comfort, away from the madding crowd’. Houses abound in the works, universally considered to be collective symbols of the unconscuous mind, (young learners visiting the exhibition, commented ‘but I often dream of houses’).  The title, ‘Home Alone’ depicts the ‘chaos of Albert Street, Durban…in spite of my dreams and desires, there is still nobody home’. Nair’s internal vision becomes a metaphor for the ‘miserable lives of contemporay Durban vagrants in places like Albert Park’.

‘The feint light is not the light of hope, but the light that is fading’.

Like De Chirico who is best known for the paintings he produced during his metaphysical period, memorable for the haunted, brooding moods evoked by their images, Nair’s drawings combine complex psychological insights with stinging social expositions that paint a less than rosey picture of modernity.

Having said this, visitors to the exhibition, and their have been many, leave inspired. Moved by the artist’s juxtaposition of great visual beauty and abject suffering, viewers, do I believe relate, each in their own way to the universality of Nair’s concerns.

He offers few answers… for like the figure under a tree in “A life Consumed by Great Decay’, in which (the figure) is entombed  by the clinging roots of the tree of life’. Unable to escape, his life is drawn out of him’.

Finally…proverbial or not,  these words ring true… ‘To be, or not to be, that is the question, whether 'tis nobler in the mind to suffer the slings and arrows of outrageous fortune, or to take arms against a sea of troubles and by opposing end them. Hamlet.

A must see exhibition. Title: The Prelude to Anxiety|Medium: Graphite pencil on paper|

Title: The Futile Quest of the Tongue-Tied Social Misfit|Medium: Graphite pencil on paper| 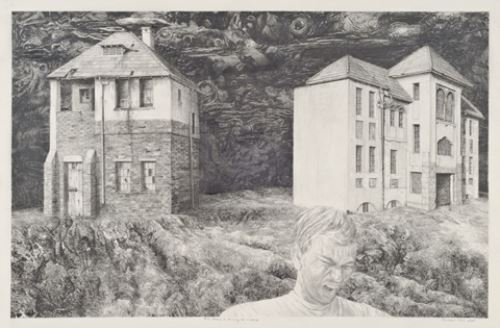 Title: This Dream is driving me Insane|Medium: Graphite pencil on paper|

Title: Vainly, I try to get a grip on things|Medium: Graphite pencil on paper| 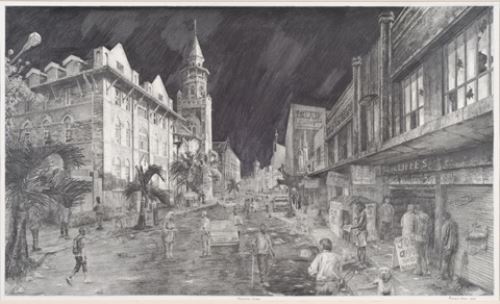 Title: The Dome of the Rock|Medium: Graphite pencil on paper|

Title: Far from The Rabble|Medium: Graphite pencil on paper|