Pedestrian Paintings (2006-2011), Andries Gouws’s travelling exhibition combines the interiors and still-lifes known from Gouws’ previous shows with a series of paintings of feet on which he has been working since 2006.

Living in Holland for 16 years after studying art in Cape Town (at Michaelis), Italy, Düsseldorf and finally Amsterdam, he started off painting “big, colourful, gestural abstract” paintings in acrylics before moving on to graphics.
In Holland he missed the South African landscape. On his return, having sold his treasured 500 kg Artel etching press and returned to oils, he hoped to paint the yearned for landscape, as well as the nude figure – subjects which “grabbed my gut most directly”.

Surprisingly though, he started painting interiors and still-lifes, unexpectedly connecting with a Dutch tradition that while in Holland he had felt he did not belong to.

Arguably, his feet paintings remain in the tradition of interiors and still-lifes, but possibly with an different intensity.
“These feet do not have the same meditative quality as my still lifes and interiors. They are more confrontational; engaging with feet disconcerts me – they look back at me in a way objects in a still life or interior don’t.”

His earlier work, he says, “often suggested that Vermeer and Piero were the artists I had looked at closely”. The current paintings “suggest other triggers: El Greco; Grünewald, Caravaggio even”. For his wife, the novelist and artist Ingrid Winterbach, his paintings of feet have a “Baroque religiosity”.  Though he is an unbeliever, the echoes of Baroque religious painting in his rendering of feet shouldn’t be that surprising, given his expressed admiration for Velasquez and Rubens.

Young, pretty feet are not the subject of Gouws’s focus – he does not conceal/hide the battering that his subject matter has endured. A clue to his choice of rendering the most abused parts of the body in the rich texture of oils lies in his description of his immediate Durban environment as an area comprising “attractively ugly industrial areas”. 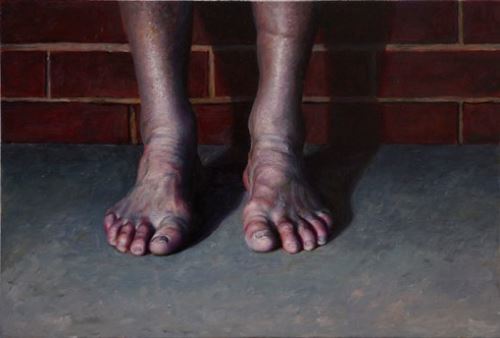