Amita Makan presents an exhibition of works based on her mother's battle with Alzheimer's disease.

Amita Makan is an artist based in Pretoria. The artist writes that:

"In 1997, a year after recovering from breast cancer, my mother, Vasanti Dhanjee Makan, at the age of 56, was diagnosed with Alzheimer’s disease. Alzheimer’s disease is not abrupt. It is insidious and nearly impossible to diagnose. It manifests in plaques and tangles in the brain, causing progressive dementia, as it gradually ravages the body and mind. There is no cure.

Our family was devastated. My mother was a courageous, strong and vivacious woman. She wore beautiful, brightly colored saris which she draped with great finesse, and in a nonchalant manner. Within minutes she would resemble a Bollywood star. As the disease relentlessly imposed itself, her sari began to hang lopsidedly over her body.

The Alzheimer’s disease assailed her thinking, memory and behaviour. She was losing her ability to hold things, to speak, to write, to read, to remember, to drive, and to tell time. There were desperate notes scattered through the house with half-written prayers, indecipherable recipes, incorrect telephone numbers, miss-spelt names and partial addresses. Her identity and sense of self was slowly vanishing.

When my mother visited me in Pretoria in September 2002, she brought me an envelope containing two sepia tinted studio photographs of herself as a young wife and mother. My mother asked me to ‘look after’ these. Of all her worldly possessions, these photographs were most precious to her. On inspection of one of the photographs, I was struck by the date. I realized that it depicted her at the early stages of her pregnancy with me, and marked the very beginning of our journey together.

Over the years, the disease relentlessly made inroads across my mother and my psychic landscapes. She became home bound and entirely dependent on her family and caregivers for her well-being.

In November 2006, I started painting portraits of my mother from the photographs she had given me. I started with the portrait of her carrying me. The paintings, done in a photorealist style, were an attempt to preserve and immortalize my mother in the face of her steady deterioration. Painting these portraits became an expression of my grieving. Over the years, I painstakingly put my mother back together with my painting and embroidery, initiating this series, ‘Evanescence’.

Upon each visit to my mother, I was forced to come to terms with the reality that her condition was worsening. She no longer spoke. The disease had silenced her. Tentatively and furtively, I started photographing my mother, and then began painting her from these photos. I searched for glimpses of her.

I painted her hands in preparation for my final portrayal of her. These hands had embraced me, nurtured me, comforted me and caressed me over three decades. They now seem resigned.

After twelve years of suffering, the disease reached its final stage. On the morning of 24 September 2009, in her bedroom at home, I held my mother’s hand as she took her last breath. 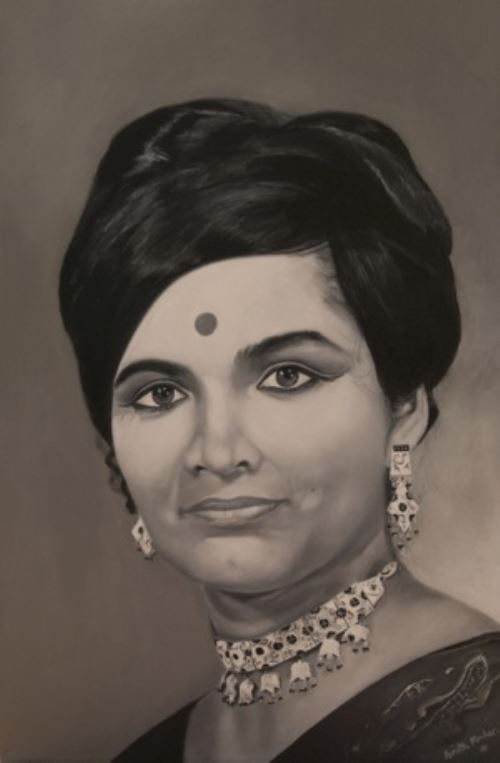 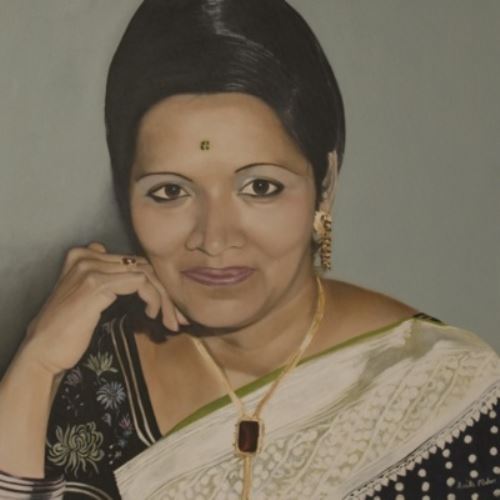 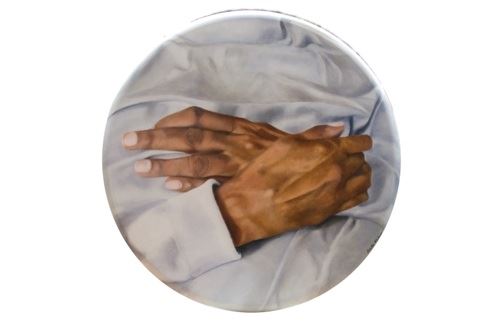