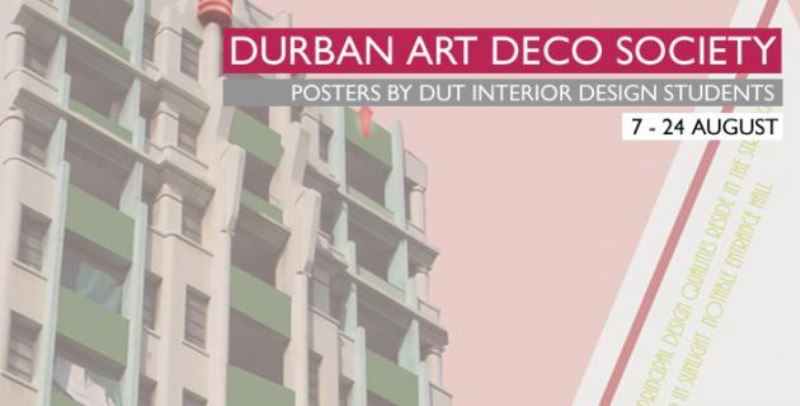 Recently the Durban Art Deco Society organised a competition with the Interior Design students of The Durban University of Technology (D.U.T.) to submit their ideas on an Art Deco style advertising poster.  This was one of the novel ways posters were used during the Art Deco period, and they generally had several levels depicting places, transport, dress and lifestyle.
This exhibition showcases some of the innovative ideas which the students came up with.

The Durban Art Deco Society was formed in 1999, its aims being to engender and spread an appreciation of our city’s Art Deco heritage here as well as overseas.

The Art Deco experience in Durban, which spanned the decade before World War II, found expression mainly through the built environment.  It has a large stock of good Deco style buildings that has led art historians to regard Durban as an important source for research on the period.  World War II had put a virtual end to all this and we had to wait sixty years to see a revival of world interest in the Art Deco movement.

Art Deco Societies world wide all belong to ICADS (the International Coalition of Art Deco Societies) which was started by the Miami Design Preservation League in 1989.  There are 31 members societies and they meet every two years at a World Congress on Art Deco® in a city with an international Art Deco image: one year in the US and the following year outside of the US.
2003 saw the Congress in South Africa:  Cape Town and Durban.

The actual term ‘Art Deco’ only came into popular use during the late 1960s and is derived from the title of the 1925, Parisian Exposition Internationale des Arts Décoratifs et Industriels Modernes.  This was an exhibition emphasising the ‘decorative arts’ not only in architecture but which included all the plastic and graphic arts such as furniture, glass, ceramics, textiles, jewellery, paintings, radios, etc.    However, the most distinctive examples of French Art Deco architecture at the exhibition were only designed for an intended lifespan of six months, after which the entire exhibition site was razed by a demolition crew on its closure.