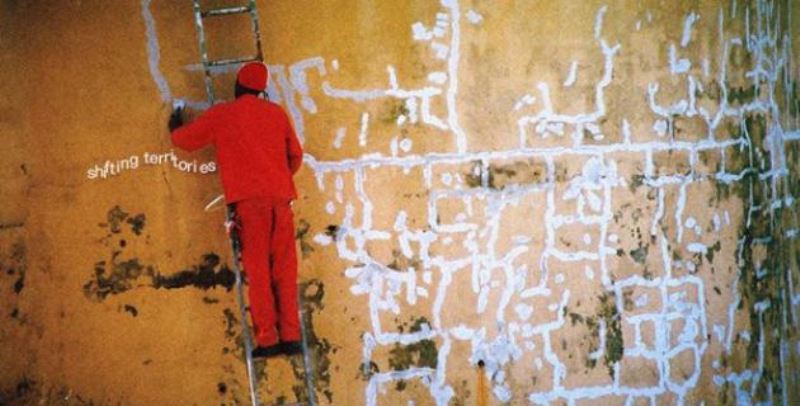 Reading the city.
Our movement within a city, the way we interact with its streetscape, its surfaces, its asperities and ruptures, is a reading. As we move we actualise a path – a path that is individual, and yet constrained by the possibilities offered. It is much as if we move elliptically through a page of text, accepting some parts, reflecting on or rejecting others. Cognitively, the memories and associations of our lives that subtend the places we pass through, form a network of meaning and reference. Our movement gives this a chronology, the same chronology that is used in narrative - linking through time events that should perhaps find their reason in affect, or gender, or necessity, more than a serial ordering. Finally the coherence produced through reference, ellipsis, conjunction is that of the text – a text whose ultimate meaning lies in the hands of the reader. A text that cannot be neutral but that is shot through with questions of power and access.

Writing the city.
Power, when conceived of as constitutive of the public sphere, as inherent in the categorisations and legalities which influence our reading, allows us to understand how a city is also a textual economy. Street Art is a fundamental, transgressive, part of this economy. Its transgression is both physical and visual. Physically it appropriates, dislodges, superimposes and subverts. Visually it contravenes genres in a writing that opens divergent meanings.

Street Art doesn’t speak TO its immediate environment, it doesn’t speak ABOUT its immediate environment. It JOINS the environment, attaching itself and all of its ego and contradictions and politics, forcing itself to be seen, experienced, witnessed, and ultimately reacted with. It claims its space unashamedly, forcing us to question its existence, to contest its existence, and when we cannot provide any adequate rationalization for why it shouldn’t exist, we must eventually accept it. It forces us to come to terms with our rapidly diminishing space for free expression in the constant commodification of culture and its continued containment in easy-to-ignore categories of constraint: fashion, entertainment, exhibition, publication. By forcing us deeper into our environment, by forcing us to connect graphically with the street, to position ourselves for, or against, or with it, Street Art brings us back into sharp focus as active participants in the lived presence of our public spaces. We begin to re-style our streets, to customize our concrete confines.
Graffiti culture artists refer to themselves as ‘writers’, concerned primarily with letters and a unique style of expressing the angles and aspects of the alphabet. Consequently, the act of painting your ‘name’ or the collection of letters you enjoy expressing is known as ‘style-writing’. The simplest form, the artist signature, commonly called a ‘tag’ is more correctly termed a ‘hand-style’. (iain Ewok robinson).

The exhibition
The challenge of bringing Street Art to a gallery is the challenge of translating subversion of style, transgression of place and divergence of meaning within a frame that reduces the possibilities of the media – surface texture, lighting, movement, context – whilst also inhibiting the movement of the gaze, the path through the city that was also a reading of Street and Art.
Transgression and movement must therefore be found within the works that are displayed. The two central pieces of this exhibition illustrate this in different ways.

The white on white graffiti by Ewok subverts a static reading. Sheen, relief, contour, form, are only discernible as one changes perspective and distance – bringing movement back into the space of the gallery. It is a reading that also requires engagement and an implication by the viewer, returning this work to the space of the street’s divergent discourses.
The final composition involving several street artists - on the floor of the gallery - requires a reading path across its surface. To read one must actualise a path, a vector, a direction over the composition. To create this composition the artists, the writers, were also asked to blindfold themselves and to let their pen traverse paper, apprehending the space of the paper in a movement that could only feel, understand the distances and the orientation – much as we cross the city.

Where to from here?
The artists, the writers, of this exhibition is already developping a project with the city with regards  to understanding Street Art and how a re-writing of the city is also a way of empowering and developing. 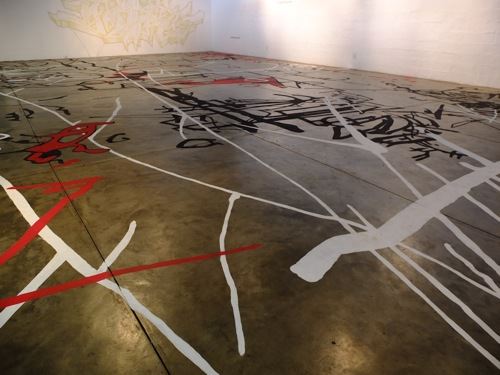 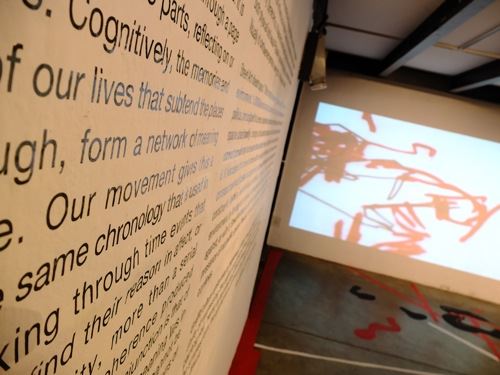 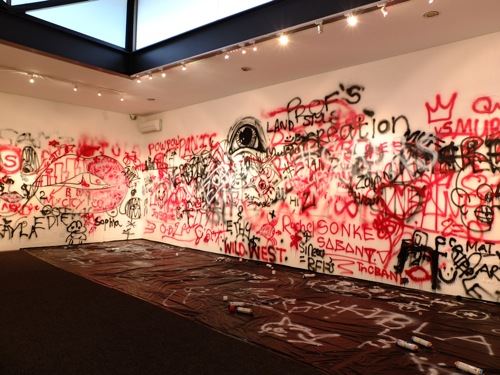 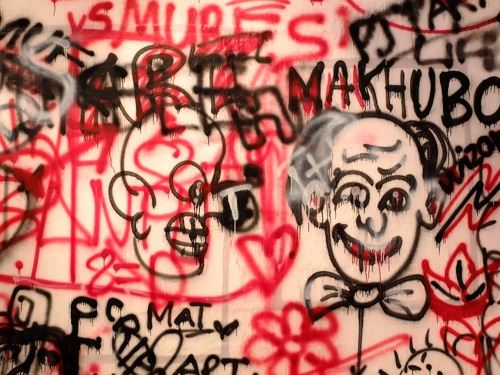 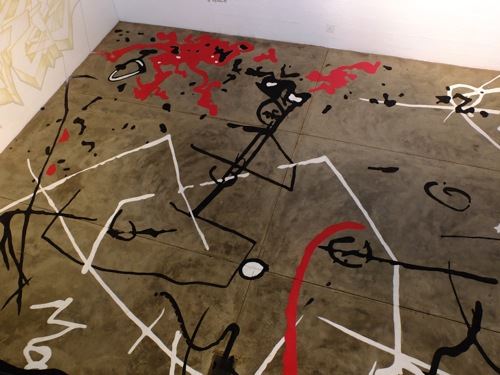 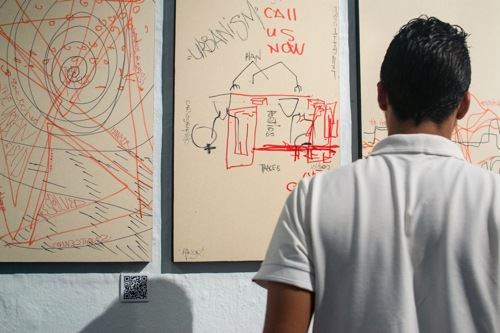 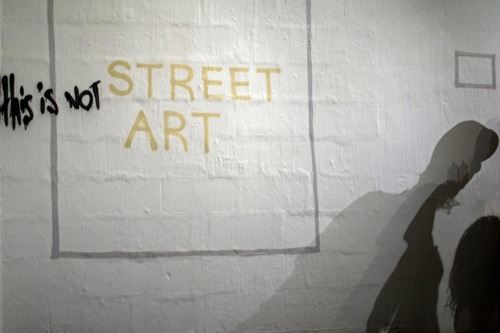