What happens to a dream deferred?

Does it dry up like a raisin in the sun

Or crust and sugar over-

Or does it explode?

What happens when dreams of freedom, equality and social justice are suspended and at risk of never coming true? In A Dream Deferred, the Harlem Renaissance poet, Langston Hughes compels us to consider the hopes and aspirations that people hold on to when dreaming (willing…) another world into existence.  What are the consequences for the idea of the nation and its people when these aspirations are not met?  In positioning the idea of Paradise? as paradoxical, this exhibition considers how notions of hope and hopelessness; utopia and dystopia; and of futurity and unresolved pasts can exist simultaneously and are tied to the dreams we have for a place.

Fuelled by myths of the ‘exotic Africa’, Durban, in the colonial settler imagination, was seen as a tropical paradise.  The projection of Durban as paradise constructs the city into a landscape of fantasy, consumption and leisure, all of which continue to delineate the city in the contemporary social imaginary.  In a critical reading of the city’s colonial past and the failings of the current political regime, Paradise?  juxtaposes tropes of Durban as a city of leisure against the city’s social realities of poverty, inequality, and spatial apartheid.  The uneven distribution of who can participate in and consume leisure is addressed deftly throughout the exhibition.

The bricolage of inner-city architectural details and motifs, imagined buildings, and the play on scale and geometry, renders the Durban cityscape strange or alien.  The city becomes a transnational utopia where ideas of statehood are revisited through a reprise of national flags and high street-style branding.   The viewer or onlooker is invited to participate in the making of these alternate city-worlds, but only from the vantage point of alterity.   From this perspective, the viewer must confront their own version of paradise, while negotiating the ideological implications this brings.  The use of colour in these city-worlds is reminiscent of the South African flag, referring to the ‘rainbow nation’ idea of national consciousness that was debunked soon after its conception.  In addition to the cityscapes, the suburban garden is a recurring theme here, invoking critiques on suburbia and its associated privileges, excesses, and banality.  In the landscape and garden scenes, the artist engineers taxonomies of novel botanic forms that animate these sites, again framing that which appears familiar, as alien.

Returning to Hughes’ question, what happens to dreams that don’t manifest? we are left with further questions:  what lies beneath the veneer of the perceived Paradise?  is it possible for deferred dreams to be resurrected? or, must they explode in order to make way for a radically different world? 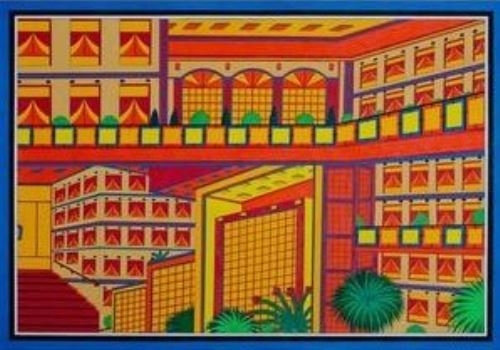