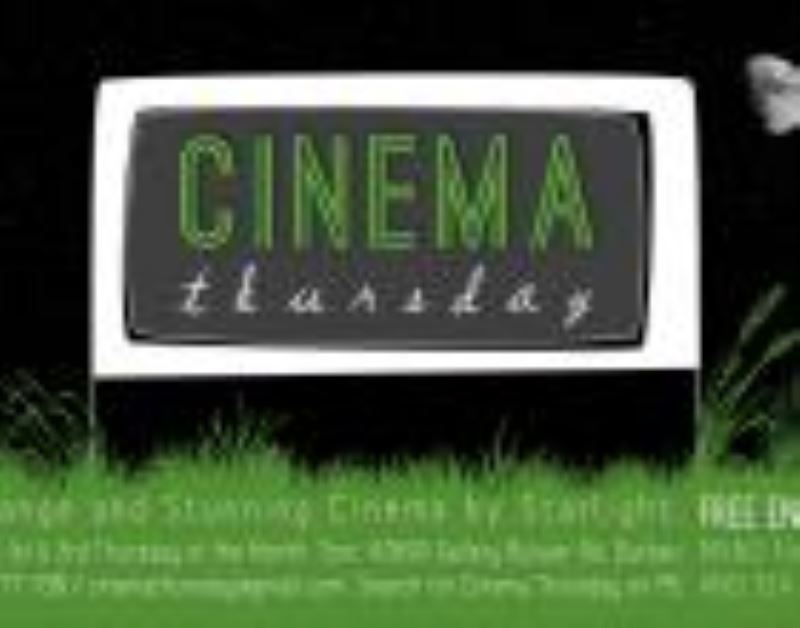 The next season of Cinema Thursday is starting on 7 July and running until 6 October - with a short break for the Durban International Film Festival. See the programme here...

The next season of Cinema Thursday is starting on 7 July and running until 6 October - with a short break for the Durban International Film Festival. See the programme below, and click to download a printable version at the bottom of the page.

FOLLOWED BY Priscilla Queen of the Desert (1994), Stephen Elliot, 104 mins, AustraliaIn this this camp cult classic, two drag-queens and a transexual get a gig at a resort in Alice Springs, a resort town in the remote Australian desert. They head west from Sydney aboard their lavender bus, Priscilla. Unpredictable, adventurous and entertaining, is a unique work entirely of its own creation, Prisicilla is like a billowing silk scarf out of a brazen blowhole in the desert. Despite its surface sheen of flippancy and wisecracking 'tarts', Priscilla is a warm and human story - and as writer/director Steph Elliott confesses, not at all what he intended, but the characters took charge and tamed what was going to be an in-your face, low budget shocker, into something greater than the sum of its parts.

The Bubble (2006), Eytan Fox, 117 mins, IsraelIt is hard enough to traverse love's minefield without having to cross a military checkpoint to visit a lover. Love, Israeli-style, is a difficult task in Eytan Fox's thoughtful examination of social and political boundaries in Tel Aviv.As reluctant Israeli soldier Noam (the charming Ohad Knoller) returns from his duty at the checkpoint, he is reunited with his two exuberant roommates. Free thinking and free loving, the group is part of a party-loving peace movement, Rave Against the Occupation.Living in the city, their viewpoint is often sheltered within a bubble -- one that allows them to remain slightly naive to the dangerous, political backdrop. The film is a complex and the subtle example of gay cinema, and casts a self-reflexive light on the crisis in the Middle East.

IT'S JUST YOU AND ME BABE

Strictly Ballroom (1992), Baz Luhrmann, 94 mins, AustraliaFor both lovers AND haters of ballroom dancing, this oddball Ozzie comedy about dancer, Scott, who has his sights set on winning the Pan Pacific Grand Prix Ballroom Dancing title, but defies the rules with improvised non-federation ‘flashy crowed-pleasing steps' and is disqualified in a lead-up event. His dancing partner dumps him and it seems the defiant stud muffin is destined to perform solo. But it takes two to pasa doble -- a fact that does not escape the resident wallflower, Fran, whose beauty is hidden under her spectacles.In his first feature, the maker of Moulin Rouge and Romeo + Juliet blends tears and laughter seamlessly into an extravagantly theatrical story about love, dreams and overcoming your fears. The underlying themes are nothing less than the neverending war between control and creativity, tradition and innovation, and the efforts of an idealistic dreamer to succeed in a world that demands conformity. And somehow all this comes back to ballroom dancing. OKAY FOR KIDS

Me and You and Everyone We Know (2005), Miranda July, 105 mins, USA'Me and You and Everyone We Know' is a poetic and penetrating observation of how people struggle to connect with one another in an isolating and contemporary world. Christine Jesperson is a lonely artist and who uses her fantastical artistic visions to draw her aspirations and objects of desire closer to her. Richard Swersey, a newly single shoe salesman and father of two boys, is prepared for amazing things to happen. But when he meets the captivating Christine, he panics. Life is not so oblique for Richard's six-year-old Robby, who is having a risqué Internet romance with a stranger, and his fourteen-year-old brother Peter who becomes the guinea pig for neighborhood girls -- practicing for their future of romance and marriage.In the vein of films like Todd Solondz's Happiness, though quite a lot lighter and brighter, thsi sweetly and warmly dark comedy tells the story of a moonbeam romance, seeking to locate a common humanity in the strangest of bedfellows.

THE BEGINNING, THE END, AND EVERYTHING IN BETWEEN

La Jetee (1962), Chris Marker, 28 mins, USAUnique in film history, this experimental short film consists of a series of still shots tied together by narration. It is the story of a post-apocalyptic Earth and time travel. Each still shot is a work of art, and the plot is compelling - a man with a strong memory of a past event witnessed as a small child (a person being shot at an airport), is periodically sent back into that pre-war period by "experimenters" with devious purposes. While visiting the past, the hero falls in love with a woman from that past.

FOLLOWED BY 12 Monkeys (1995), Terry Gilliam, 129 mins, USADirectly inspired by this week's other film La Jetee, the pairing should be an interestig example fo filmic intertextuality. An unknown and lethal virus wiped out five billion people in 1996. Only 1% of the population has survived by the year 2035, and is forced to live underground. James Cole, a convict, reluctantly volunteers to be sent back in time to 1996 to gather information about the origin of the epidemic (who he's told was spread by a mysterious "Army of the Twelve Monkeys") and locate the virus before it mutates so that scientists can study it. Unfortunately Cole is mistakenly sent to 1990, six years earlier than expected, and is arrested and locked up in a mental institution, where he meets Dr. Kathryn Railly, a psychiatrist, and Jeffrey Goines, the insane son of a famous scientist and virus expert.

Koyaanisqatsi (1982), Godfrey Reggio, 83 mins, USAKoyaanisqatsi is a truly remarkable film - regarded by many as a cinematic masterpiece, that operates on the level of the sensory and has 'redefined the potential of filmmaking. Director Godfrey Reggio, cinematographer Ron Fricke and renowned composer Philip Glass have created a spellbinding film, rich in beauty and detail. Interestingly the film took three years to shoot, and equally long to create the score, illustrating the mammoth creative task that was the creation of this work. With no dialogue, and a protagonist who could be said to be, quite literally, the entirety of humankind, the film tells the story of "life out of balance" in a kind of vivid astonishing environmental aria-cum-documentary.Unique, profound, utterly mesmerizing the film contrasts the tranquil beauty of nature with the frenzied hum of contemporary urban society. Uniting breathtaking imagery with a hauntingly evocative, award-winning score, it is original and fascinating, and arguably one of the greatest films of all time.