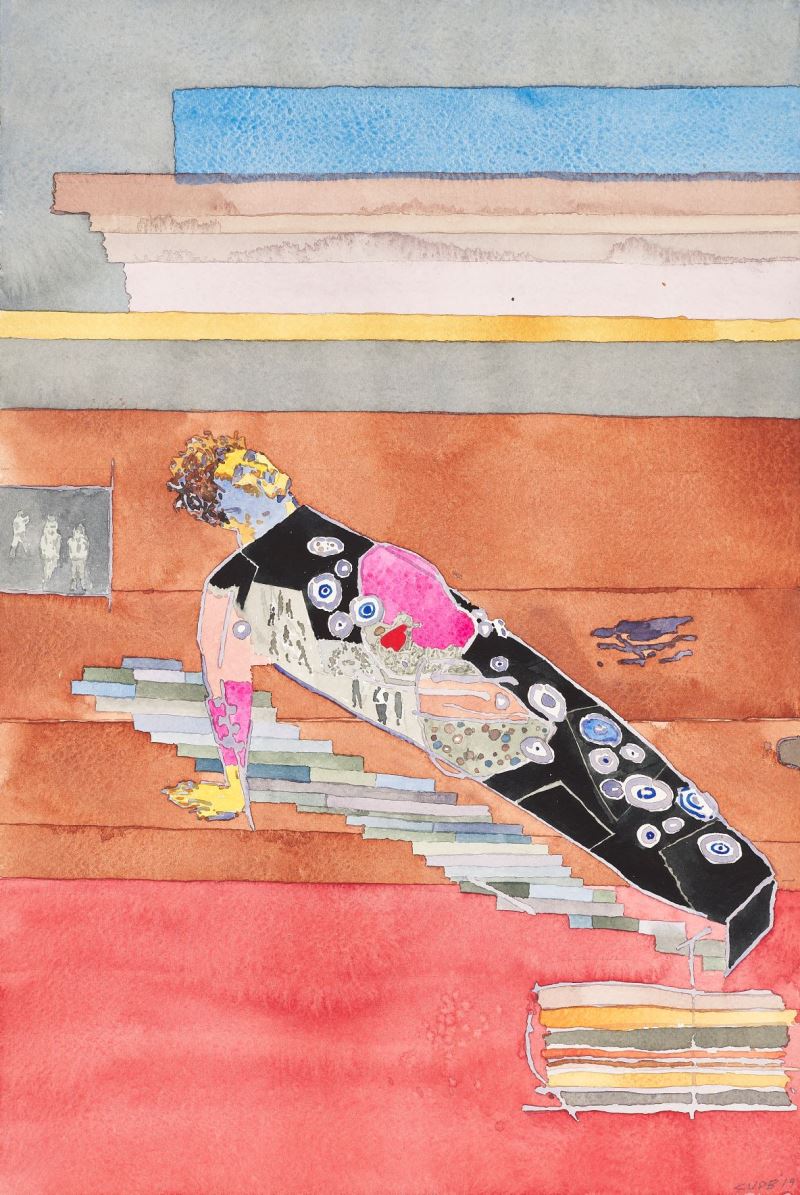 A fragment of a foot, a hand, a piece of land and strata holding memories of the forgotten many.

Clive van den Berg’s solo exhibition at the KZNSA gallery, Remembering, brings together sculptures, paintings and works on paper spanning a decade. The exhibition is an evocation of the plight of the queer community, specifically the continued discrimination of queer bodies the world over and the failure to rally behind the gay community during the AIDS crisis.

Beginning with the line, through sketches, traces, and threads on surfaces, van den Berg gestures towards a language that historicizes. Beneath each mark is a narrative of histories untold and histories forgotten. The author Tim Ingold argues that any history can be “subsumed under a general history of the line”, similarly van den Berg’s practice is best understood within the world of genealogical lines, geological lines and lines capable of bending. Read in this way, his work — whether in painting, drawing or sculpture —is a melody arranged, a recitation of the way horizons are formed. To put this more eloquently in the words of poet Matt Donovan;

“Surface engraved with a narrow stroke, path imagined between two points. Of singular thickness, a glib remark, a fragment, an unfinished phrase. It is any one edge of a shape and its contours in entirety. Think of levelling, snaring (the body’s disposition, both in movement and repose). It has to do with palms and creases, with rope wound tight on someone’s hand, things resembling drawn marks: a suture, or a mountain ridge, an incision, this width of light.”

His work is born of the desire to do something, because “the reason for doing nothing is always wrong” and the making of beauty is a redemptive act.  Whether he is mapping memory, holding the archive or kissing in limbo, the work is simultaneously loose and exact - with incisions and inscriptions that are truncated, fluid, elusive and surprisingly tender. There is an oscillation between complete calm (as seen in works such as Outcasts and Misfits VII, 2020) and restlessness (as seen in works such as Highveld Landscape, 2020). These oscillations are often communicated through rigorous mark-making…..a form of ecstatic contemplation where he “cuts open a wound in the chaos of the world and installs at the bottom of that wound its shards of unambiguity”.

In the aptly named sculpture, Porous (2021), wood is carved into concentric rings that resemble shells. A foot is connected to and turns into a body through a layering of circular forms, some flat and others full. For van den Berg, the circle contains a multiplicity of references and functions as a channel that connects the body to the exterior, he explains; “circles denote porosity that encompasses other people, political and social realities as well as the microscopic unseen world of viruses, fungi and other unseen elements.” It is curious that the state of porosity, which the artist frequently alludes to, can be articulated through what is known as a “void fraction” — Φ = Vv/ Vt (where Φ = porosity, Vv = void volume and Vt=total volume). To speak of porosity is to speak of a state of being filled with pores (Middle French),  it is also to speak of a passage channel in the body (Medieval Latin), it is also a passage or a way out (Proto-Indo-European), to wander (Germanic) and equally, it is to speak of void spaces calculated by the formula above. It is simple then to comprehend how van den Berg connects the porosity of the body with that of the land —both land and body are permeable, pervious and penetrable.

In Party in Limbo (2021), van den Berg directly references a state of limbo that permeates much of his work. The ink drawing depicts figures in an indeterminate space, some are dancing, others fleeing, crawling, crouching and others laying flat, perhaps dead. For the artist limbo is a useful technique to think through what is abandoned, what is forgotten and what lies in the netherworld of neither heaven nor hell, he explains; “Limbo itself is a way to visualise the souls of people who have died unlamented and vilified. I imagine it as a place where both the living and the dead meet.” In Highveld Landscape (2020), this state of limbo is depicted through a composition of a landscape with multiple figures. Similarly to Party in Limbo, there is an obscuration of any sense of time or space. The landscape lacks a horizon and as such conflates any sense of here against there or above and below, he illuminates; “when time and space is fractured and collapsing, the horizon cannot remain secure. The perspectival system and logical point of view shifts.” This gesture is repeated once more in the work Landscape Above, Below III where a combination of marks evoke a hill (above ground) that could also be read as a hole (below ground).

By attempting to depict a state of limbo, van den Berg draws our collective attention to a critical question; how does an entire society leave this state of limbo? A limbo produced and nourished through apathy and the complicity contained in forgetting to remember! In addition to evoking neither worlds, van den Berg upends any sense of orientation. Instead, the landscapes he imagines integrate the overground and underground into unstable topographies. These over and under scapes point to the disorientation felt by those whose lives are marked unworthy and disposable; be it the gay men stoned to death by ISIS or the many communities ravaged by the HIV crisis and more recently the coronavirus. These are lives for whom the “hourglass of existence is turned upside down, again and again, ”, and them, with it….. specks of dust.

Although van den Berg’s work contains a representational register, the portrayal of figures is almost always disfigured, distorted and shifting, pointing to the condition of precarity experienced by queer communities. Precarity is revealed further in works such as Man Loses History (2021) and Man Falls (2019). Man Loses History is a sculpture made of steel and carved wood. Gazed at from afar, the sculpture resembles the ink drawing of the man falling — a lone foot extended while the second bends at the knee, upside down with hands reaching towards the ground. The sculpture contains reconstructed books made of wood as a reflection on the archive where the archive is read as written records and materials made up of documents, photographs, registers and statistics in relation to life and death….but also the sutures, voids, holes and openings within such archives. Within tenuous and incomplete archives history seeps, blurring boundaries between the past and the present, revealing the terror of living and the horror of dying.

Even as they are unsteady and falling at times, van den Berg’s figures are enveloped by a sense of hope, reminding us of humanity’s capacity for joy as written into text by theorist Alfredo Bonanno; “He alone is happy who, having experienced vertigo to the point of trembling in his bones, to the point of being incapable of measuring the extent of his fall, suddenly finds the unhoped-for strength to tum his agony into a joy capable of freezing and transfiguring those who meet it.” Those who meet the exhibition, Remembering, will be faced with agony, joy, love and rage. Because rage enlivens the possibilities of creation and travels alongside love. If Remembering indicates van den Berg’s anger at our amnesia to the pain of others, it also indicates prospects of love. Love is signalled through the amount of care that goes into the making. Often working in large-scale, his own body is implicated in that it has to move, stretch and contort to reach various angles. He explains, “I climb up ladders, I move constantly between the painting’s surface and the back of the studio to see from afar. I lay the canvas on the floor to wash and flood the canvas. My arm is sometimes calm and steady when painting a straight line, often with the help of a T-square but often my arm and hand stutter in movement. Each mark is a thought. Sometimes these are calculated and at other times they are not.” The process of making is long and arduous, van den Berg elaborates; “ At the end of the day of painting I am exhausted, both physically and mentally.” The meditative repetition of movements — carving, marking, inscribing — unfolds in quiet and steady moments. Through its complex and intricate layers of carved wood, In Memorium – they threw him (2016), offers a glimpse into van den Berg’s rigorous approach. His is an approach that centres love in the context of pervasive cruelty.

Remembering draws on what lies in the shadow of memory. The exhibition signals towards the connective tissue between forgetting and remembering, pointing the viewer towards enduring questions of which lives matter and how they matter!