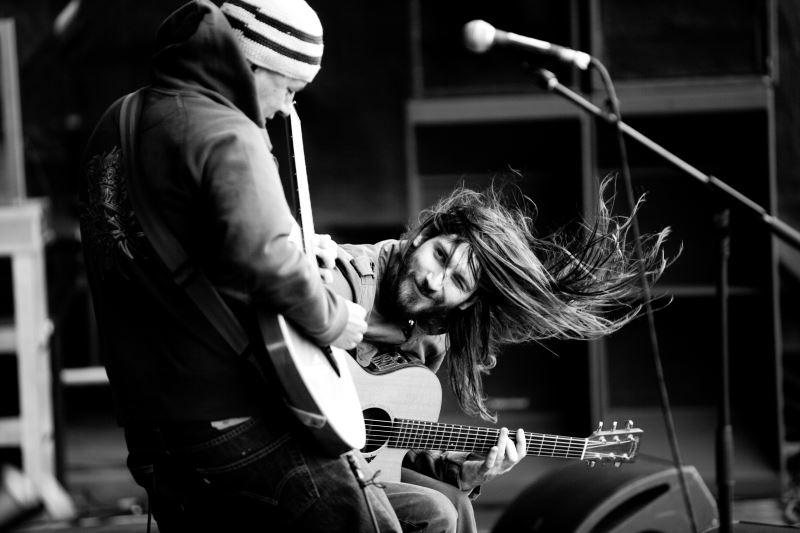 The KZNSA is delighted to welcome back Guy Buttery and Nibs van der Spuy for an exclusive Durban concert under the stars at the Arts Café. Photo: © Jonx Pillemer

The KZNSA is delighted to welcome back Guy Buttery and Nibs van der Spuy for an exclusive Durban concert under the stars at the Arts Café.

Having shared the stage together for more than 20 years now, Nibs van der Spuy and Guy Buttery capture the spirit of South Africa, with its vast melting pot of influences and colour.

These two virtuosos collaborated on a series of shows in the early and mid-2000’s before their respective solo careers took off with whirlwind individual touring schedules across the globe. Their performing paths crossed at a major festival in Toulouse, France, and this inspired a new combination of performances and sowed the seeds for recording a full length album together. “In The Shade of the Wild Fig” showcases their mutual interest and deep love for World Music and different folk movements featuring numerous instruments such as the cuatro, mbira, tanpura, sitar and various acoustic guitars.

Nibs and Guy have toured many major festivals and venues throughout Europe and the UK in promotion of their SAMA nominated album, “In the Shade of the Wild Fig”. The duo has also won the very prestigious “Standard Bank Ovation Award” at The National Arts Festival. These accolades led to further sold out performances at numerous festivals and concert halls in both South Africa and in Europe receiving rave reviews for both their live show and their recorded work. Van der Spuy and Buttery were then invited to perform with the 52 piece KZN Philharmonic Orchestra, dubbed “Africa’s greatest orchestra” and were later voted “Top Live Show of the Year” by The Cape Times.

Guy has been featured in the world’s biggest selling guitar magazine ‘Guitar Player’ which saw him performing at leading guitar festivals throughout Europe, Brazil, Australia and the USA. He has also received 3 major national awards including the esteemed SAMA (South African Music Award) for ‘Best Instrumental Album of the Year’. In the same vein, Nibs is a highly acclaimed guitarist, singer and songwriter, being featured in leading publications from France’s ‘Liberation’ to the UK ‘Guardian’. He is constantly touring with his biggest support base being in France.

Live in Lisbon was recorded next to the Tagus river in Belém on the outskirts of Lisbon. It was their first performance as a duo in Portugal. Speaking about the evening, Nibs commented: "It had been a good while since we had played live together, but all the essential ingredients were still very much present. Neither of us were aware that everything was perfectly in place and that we were being recorded. From this intimate setting in Portugal, with a bunch of beautiful people who came from all corners to be a part of this wonderful evening, we are incredibly happy to share this recorded moment with the rest of the world."

The upcoming tour of the Western Cape will see the launch of their 2021 SAMA Nominated album “Live in Lisbon” in South Africa.